Ashadh Sud 15 (Punam) in the English calendar months of July-August is celebrated as Guru Purnima also known as Vyas Purnima.

It was initiated by the disciples of  Krishna Dvaipayan Vyas better known as Bhagwan Veda Vyas; the son of Sage Parashara and grandson of Sage Vashishtha.

The disciples visited him ceremoniously on this day and offered their respects unto thier Guru. Ved Vyas divided the Veda into four parts (Rig, Sam, Yajur, Atharva), authored Bhramsutras, the Eighteen Purans,  and the great epic of Mahabharat. Veda Vyas is one of the seven immortal beings who still exists today in divine form.

Our revered Nand saints too mention the works of Sage Ved Vyas in their authored scriptures.

The Guru Gita, residing within the Bhram Sahita of Skanda Puran elaborates on the significance of the Guru, the first verse which is presented below and commonly recited witihn the Sanatan Dharma.

Guru is Brahma, Guru is Vishnu, Guru is Maheswara (Shiva), The Guru is verily the Para-Brahman

(Supreme Personality of Godhead) - Salutations unto that Guru

The Guru creates sense of wisdom in the disciples hence is Bhrama; the Creator

He nurtures the principles of wisdom and righteousness hence is Vishnu; the Preserver

He destroys the ill-knowledge and ignorance within the disciple by propagation of wisdom and righteousness hence is Shiva; the Destroyer

He; the Lord who is the Guru of all is the Supreme Personality - Salutations unto that Guru

Lord Swaminarayan's divine qualities as a disciple and a Guru are narrated by Shatanand Swami within the Sarvamangal Namavali. 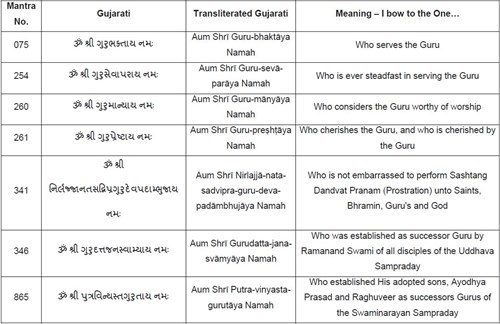 Why need of a Guru?

The blind cannot lead the blind. Only and enlightened person can lead one to enlightenment through wisdom and education on righteousness and spirituality. The relationship between the disciple and spiritual master is the highest expression of friendship as it is based on unconditional divine love and wisdom.Therefore it is the loftiest and sacred of all relationships.

To achieve success in the divine search, as in every other aspect of our lives it is paramount to abide by the laws of the Supreme Lord. To be able to understand the secular knowledge available in an institution, one would have to learn from a professor who is educated. Similarly to understand spiritual transcendental truths it is necessary to have a spiritual teacher, or Guru - one who knows God.

In the twenty-seventh (27) Vachanamrut of Gadhda Antya Prakran, Lord Swaminaryan says, 'If a devotee has an intense yearning to engage in the devotion of God and to associate with Saints then regardless of any habits that he may possess, he eradicates it and behaves according to the Saint's will and command. Even if that habit is such that it has become bound to the soul, an intense desire to associate with the righteous (Satsang) will eradicate it.'

The lineage of the successors of the Supreme Guru, Lord Swaminaryan is presented within the Guru Parampara

Laxminaath (NarNarayan) who begins the lineage, Naathmuni Acharya and Yamunacharya; who are central Gurus and all Gurus thereafter, I offer my humble obeisance to the lineage of Gurus of the Sampraday.