A Head Of A Wrestler

There was a strong man. He was a wrestler. He was very much proud of his strength, so wherever he went he would try to exhibit his strength by broadening his chest. He would go to any saint in the same fashion - broadening his chest. Even to see Shriji Maharaj he went in the same way. Even to the temple, the same fashion. Shriji Maharaj saw this. He thought that such a characteristic in a devotee was improper. But there will be no effect of direct saying on such a man. So Maharaj taught him in his own way. One day, this wrestler came to Maharaj for darshan, boldly broadening his chest with pride. As soon as he came near Maharaj and bowed his head before Maharaj, Maharaj stretched his hand and pulled his head under his armpit.

The head was imprisoned. The wrestler tried hard to pull out his head, but in vain. He could not. His body perspired completely. Maharaj lifted his hand slowly and the wrestler fell down like a sack of grain. Maharaj laughed and all present all laughed. The wrestler's chest now pressed inside and he could not lift his face to see, so much ashamed he was! Maharaj told him, “Have you realised anything now? Howsoever powerful a wrestler you might be, never go to a temple or to a saint so haughtily broadening your chest. We should never go to satsang so haughtily but very humbly.”

Even after this incident, the other two wrestlers did not take any lesson from it. Both of them, “We will walk as we walk.” One day Maharaj stretched both of his hands and pulled both the wrestlers under his armpits, and pressed them so hard that they could not be free. Both the wrestlers tried hard, even they kicked their legs and dashed their hands. But Maharaj went on talking with other satsangies as if nothing had happened. At last these wrestlers were totally exhausted. Their mouths foamed. Maharaj lifted up both his hands and threw them left and right. They fell away at a distance. After a long time, they were able to move and stand up. They were ashamed of themselves and ran away down-cast. The devotees implored, “Maharaj, we never had such a darshan. We have witnessed your great miracle!” But these wrestlers were true devotees of Shriji Maharaj. They threw away their pride, but never Maharaj. Now they go to Maharaj very humbly. 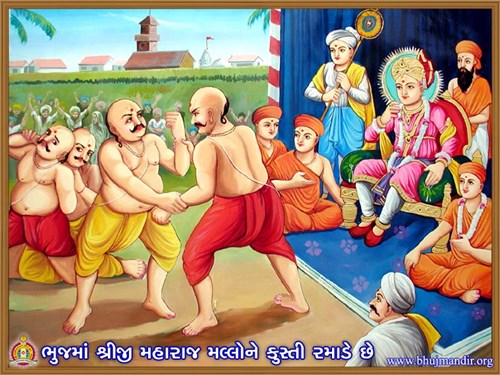