The son of a certain Patidar of Rampur of Kutch went away from home to become a Sanyasi. All his relatives and friends forcefully told Patel, “You are the leader of our caste and the leader of this village, and yet how strange it is that your own son is not under your control! Find out him by all means, beat him, force him to marry. When you are unable to show your fatherhood, how would you show your leadership of this village ? Patel was thus irritated. He was now angry with his son.

He knew that nowadays his son was all praise for a Swaminarayan Sadhu. He used to tell any Tom, Dick and Harry that God had given him life/birth only to serve God and nothing else. The father also knew well where his runaway son would be. So he went directly to Muli. There he found is son and brought him back home. This boy's name was Shamji. Who so ever is coloured with the colour of devotion, his devotional colour would never fade. For some days he kept quiet, but at last, finding an opportunity, he escaped from his house and reached Muli. Again his father ran after him and brought him back. Now he kept a strict watch on his son. But strict watch would prevent him whom Shriji Maharaja's voice is heard. For the third time Shamji escaped and again was brought back home. This was repeated four times. Now his father made the watch stricter. Again Shamji escaped from the watch and reached Muli.

His father became desperate to arrest him. His son had also become desperate. Shamji had now determined, “Better to die than to return home”. For the fifth time also his father came to Muli to bring him back. The river was over flooded at that time. The name of the river was Bhogavo. When there is no water in that river, hardly a drop of water is visible, but when there is a flood in the river, her wrath/temper would be quite unbearable. Shamji threw himself in the flooded Bhogavo in order to escape from his father. Shamji began to be dragged in the flood of water. None dared to save him from the flood. The father also kept on seeing him to be drowned. He now repented much for what he had done. “I wanted a son not to be a Sadhu, but on the contrary I lost my son”. He had tears in his eyes and he said, “O God! If you wish Shamji to be a Sadhu, let him be so. I only wish him to be alive. I will never try to take him back”.

Now it so happened that Shamji came out of the river safely because of Shriji's favour. It appeared as if the river herself flung him away on the banks. His father did not utter a single word. He allowed Shamji to go to his way. Shamji came to Bhuj and was initiated by Swami Acharyadasji. He was then after renamed as Aksharjeevandasji. He studied Sanskrit but his inner knowledge was greater than the bookish one. The whole of VACHANAMRIT was at the tip of his tongue. More over he could interpret Maharaja's words so nicely. When he could read a Katha so well that it appeared that the river FALGU was flowing underground! So to says his speech was so serve and resonant. When a listener heard his Katha flowing incessantly, he had the experience of holiness and peace. Many leading personality of the society became his disciples. Common men were mad after him. Swami gave a brilliant polish to the Satsang of Kutch. He used to go from village to village . He studied their woes and tried to make their faith and trust firm.

Let us have a glimpse of the effect of his speech on public. Once the chief of Rampur of Kutch came to Bhuj on a Government duty, accompanied by some friends. They all went to the temple to have the Darsahan of Swami, but the chief did not go. He stood outside the temple. He told, “I would neither listen nor see anything,” but his companions insisted, “You may not see anything and may not listen to anyone, but do come inside. I won't appear good if you stand alone outside.” The chief agreed and went in. Swami's Katha was in progress. Swami was addressing very slowly and emphasised some important topic. The chief had decided not to see. But Lo! He started and stared at the brilliant face of Swami. He had desired never to listen to anyone. But Lo! He tarried to listen to Swami's flowing speech. While thus gazing and listening, some miracle occurred. The doors of his inner conscience opened up, Swami directly entered it, and made a permanent stay there. All the vices of the chief were completely cleaned away by Swami's speech. His heart thus became pure. There lighted the lamps of faith and devotion (Shraddha and Bhakti)

The chief was sixty years of age at that time. He had a perfect experience of this world and worldliness. But no-body knew how this worldliness was drowned. Katha was over. The chief fell at the feet of Swami and said, “I don't want to go back home now”. The chief got initiation and turned himself into a Sadhu. Iron was transformed into pure gold by the touch of PARASMANI (Philosopher's stone). It is worth noting how Swami's answers were accurate and unfailing. Once someone asked Swami, “Swami, people say that the person who tell the KATHA might be good or bad, but we should always note what he tells, and not what he does. What objection we should have if he explains the Geeta and the Bhagwat so lucidly ?” Swami laughed a little and said, “If we keep cow's milk in a vessel made of dog's skin, shall it remain holy? It shan't be. Can we use it ? Not at all. Similarly, if the words of the Geeta and the Bhagwat come out from the mouth of an addict, those words will lose their sanctity; moreover, we won't achieve anything”. Then the question rose, “Whatever kind of Katha teller might be, but if we, the listeners, are good, don't we achieve anything ?”

Swami replied, “If we tie a silver rope to a golden jug, and begin to draw salty water from a well, shall we get sweet water? Not at all. All his attempts to draw water will go vain”. Against there was another question, “Why shall we be not benefited when the words from the Geeta and the Bhagwat are the same?” Swami smiled and said, “We can eat baked wheat and gram. But can they beused to be sown? No, never. Similarly, the words coming out from an addict's mouth might be the same, but they are like baked wheat and gram. They will never grow.”

Then someone asked, “Swami, if it is so, how do we understand the deep meaning of the Geeta and the Bhagwat” ? Swami said, “It can be understood only by a good company of a saint (SAMAGAM) when we drink milk, we do to have the taste of milk, but do we get the taste of Ghee that lies in milk ? No, not at all. It can be possible only when we know how to turn milk into curd, how to churn curd, how to prepare butter, how to turn butter into Ghee. Similar is the case of the secret of the Geeta and the Bhagwat. It can never be understood by the power of one's intellect. It can only be understood if explained by a saint.”

Such a great saint was Swami Aksharjeevandasji !. When he had decided to leave this body, there was a great SAMAIYA at Bhuj where many people gathered. Swami said, “Today I want to leave this body. So people should be given meal earlier. The meal was to take place at four O'clock in the afternoon. Swami arranged the meal at eleven. Then he called for the great saints and householders, he recommended for the Satsang. Afterwards he passed away peacefully. 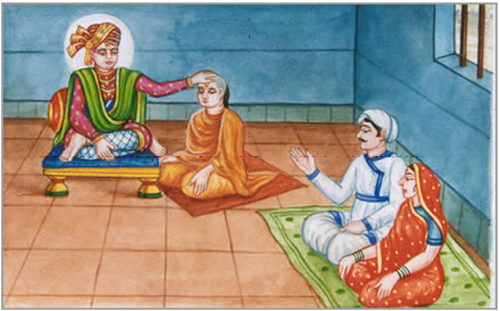